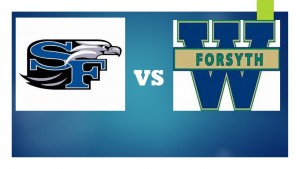 In front of a rocking home crowd in The Den, the West Forsyth Wolverines kept pace with the undefeated South Forsyth War Eagles into the 4th quarter. After a 95 yard drive brought them within three, West recovered a surprise onside kick and went 50 yards for the go ahead score.  With the crowd in a screaming frenzie, West defensive end Clint Hall sacked South quarterback Davis Shanley on third and fourth down to pull off the upset, 38-34.  It’s West’s fifth win in a row after opening the season 0-2.  West twice came back from 10 point deficits.  West quarterback Kiernan Hamilton, one of the top ten passers in the state, threw for 245 yards and five touchdowns, including three to tight end Ben Bresnahan.  Shanly finished with 251 yards through the air with two touchdowns, both to WR Jalen Camp, and ran for 115 more in South’s first loss of the year.  If there was ever a game you want to enjoy a second time, it’s this one!  Follow the link to enjoy the replay of this instant classic.     West upsets South

Lambert, which pounded Northview, now sits atop Region 6 AAAAAA at 6-0 in the region, and sets up next Friday’s game at Lambert, against now, at 5-1 in the region, second place West Forsyth. You can hear that game live starting at 7 right here on Forsyth Sports 365!