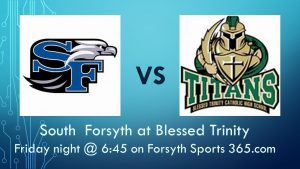 South Forsyth faces one of their toughest opponents maybe ever when they take on 4A state champions Blessed Trinity on the road in Roswell Friday night.  The Titans boast players committed to Ohio State and Georgia, among several, and are ranked among the giants from California, Texas, Florida and Georgia in the Max Preps’ National Top 100.

We asked Coach Arnette if we could get a couple players on this week and he chose Senior Quarterback and 2018 Captain Drew Morris and Senior Defensive Lineman and 2018 Captain Luis Gonzalez.  Here is their interview with Greg Golden.

You heard Morris shout out to teammate and fellow Senior and Captain, Defensive Back Jake Pehrson, and ask for our prayers for this young man.  In the season opener last week at Sprayberry, Pehrson suffered a knee injury that could be serious.  He’ll undergo an MRI Thursday to see the extent of the damage.  Coach Arnette doesn’t talk about injuries in the interviews, like most coaches, to avoid too much info to the ears of the opponent.
But off mic, privately, he was clearly moved when talking about Jake, not only as a player, but as a teammate, part of his football family.  Pehrson won’t play Friday at Blessed Trinity.
When asked who would fill Pehrson’s rather large shoes, Arnette wasn’t biting.  “Somebody’s gonna play there”, said the Coach.”Maybe two. We’ll see how that turns out.”

Listen to Coach Arnette’s interview ahead of Blessed Trinity here.

Don’t miss our live call with Greg Golden and Doug Thomas, Friday night from the Blessed Trinity stadium, LIVE here on Forsyth Sports 365.  And it’s FREE!!  For $9.95 you can purchase a subscription to NFHS.com/Blessed Trinity and watch the game live.  Turn down the sound and listen to Greg and Doug’s call for a more War Eagle friendly delivery.  Be sure you cancel your subscription after the game so you don’t forget and they charge you automatically next week.  Unless, of course, you’re a BT fan too.

Forsyth Sports 365.com is a member of the War Eagle Sports Network. All Rights Reserved.