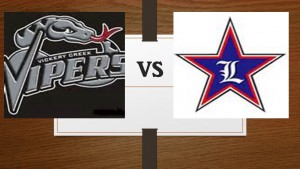 Vickery Creek turned four of six Liberty turnovers into touchdowns Tuesday night, zeroing in on the postseason by shutting out the Patriots 28-0.  The Vipers went 33 yards after a fumbled punt, 23 yards on an interception return, and 50 and 40 yards after strips.  Follow this link to the game REPLAY here.

Both these teams were already playoff bound before the opening kick.  Vickery Creek finishes at 7-1 and the second seed in the county’s upcoming middle school tournament.  Liberty falls to 5-3 but remains the 4 seed.  The tourney semi-finals are next Tuesday.  #1 North Forsyth hosts #4 Liberty at North Forsyth High Stadium at 6:30 and will be our game of the week.  #2 Vickery Creek hosts #3 Riverwatch at the gridiron in the woods behind the school at 5:30.