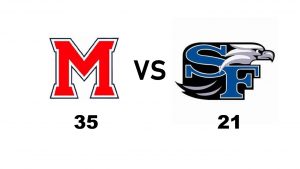 Coming in to Friday night’s game with Milton visiting South Forsyth, much of the attention was focused on Milton quarterback Jordan Yates.  The Senior signal caller is committed to Georgia Tech, and the challenge for the South Forsyth defense would be to contain the dual threat standout.  For the first half and the opening seconds of the second, the War Eagles did just that.  The score at halftime was 6-0 Milton, but South could’ve had at least two scores on spectacular catches by Colby Cruz on Drew Morris bombs.  Unfortunately, Cruz lost the football at the end of both, and Milton returned them to midfield.  Still, South’s defense stood strong.   In the opening seconds of the second half, a huge hit by South DL Jamal Camp on Milton’s leading rusher, Josh Edwards, dislodged the ball, sent Edwards to the sideline and led to a touchdown that gave South Forsyth a 7-6 lead.   But in that defining moment, the War Eagles may have unknowingly unleashed the beast.  Milton turned to the arm of Yates, and in the blink of an eye, aided by a pair of fumbles by Morris, the score was 35-7 Milton.  Yates offensive line gave him all kinds of time, and the standout signal caller hit his receivers in stride on 4 TD passes of 25 yards or more.  South made the game respectable by never giving up, and unveiling a spread offense that could spell trouble for opponents down the Region 5 stretch run, leading the way to two late touchdowns. Milton improves to 5-2 with the win, 2-0 in Region 5 7A.   South Forsyth falls to 4-3, 1-1 in the Region.  Up next for Milton is Forsyth Central at Milton.  South Forsyth welcomes North Forsyth for the 2018 iteration of the Civil War, called LIVE here on    Forsyth Sports 365.

Catch the replay here, including a halftime performance by an ensemble band comprised of middle school students from feeder schools Piney Grove, Lakeside and South Forsyth.  And it closes with a fantastic performance by the South Forsyth Marching Band of their competition program.