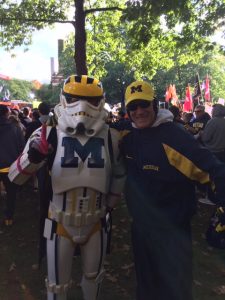 Richard Golden, aka The Sports Freak, poses with the Wolverine Trooper during the ESPN College Game Day event Saturday morning ahead of Michigan’s demolition of Wisconsin.  (One lucky buggar).