Everybody got to play as South Forsyth racked up another 50+ points in its home opener, a 52-27 win over Central Gwinnett   That’s 115 points in it’s first two games.  Defensively, the War Eagles effectively shut down anybody not named Mekhi Mews to improve to 2-0 on the young season.   Meanwhile, next week’s opponent, some school named Lambert, comes in to War Eagle Stadium 4-0.

But first, let’s take a minute to enjoy this one.   Here’s the replay of the fun and festivities in the Nest Friday Night.  Join Greg Golden and Mike Newsome on the call below. 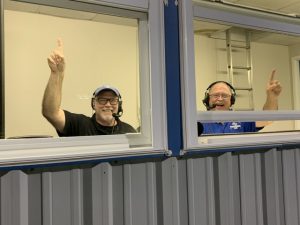 Greg and Mike in the booth.  Photo courtesy Carrie Meersman.