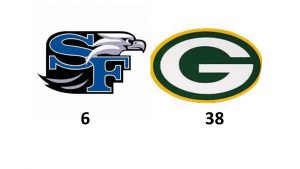 What sets Grayson High School apart from the rest?   Consider this.  When FS365 arrived at the press box above Grayson Community Stadium, we asked Grayson Athletic Director Brian DeBarry where he’d like us to set up.  “You can have this second booth right here.”, he said.  “ESPN and GPB aren’t here tonight.”  See, they’re regulars on TV, so they must be pretty good.   Still, there was little (by Class 7A standards) South Forsyth hanging right there with the big ol’ Rams at halftime, down just a point, 7-6.  In spite of the pre season attrition with the split to Denmark, in spite of the unbelievable string of injuries, there were the War Eagles, coming out of the locker room with the whole state starting to chatter, “Grayson’s only up by a point over South Forsyth!!”  A proud moment for the War Eagles and War Eagle Nation, and the last one for 2018.  Though the War Eagles tried their best, they couldn’t break through a stifling Ram defense, which forced punt after punt and slowly pushed South Forsyth back toward its own goal line as the third quarter proceeded.   Finally, the dam broke, and Grayson put three quick scores on the board to take a 24-6 lead.   On the ensuing kickoff, a botched attempt to corral a short kickoff gave the Rams the ball inside the War Eagle 20.  A few seconds later, touchdown, 31-6.  On the next kickoff, it looked like instant replay.  Touched by South and recovered by Grayson at the 18.  Short kick, botched return, one play later touchdown and that was enough.  With five and a half minutes to play, both teams emptied their bench and let the kids whose jerseys sere clean go and get them muddy.  Grayson now hosts Norcross in the second round.  It’s a game Grayson really wanted.  Apparently they had scheduled a scrimmage back in
August, went all the way over to Norcross, and Norcross didn’t show up.  Can you say Revenge?    Meanwhile, South Forsyth comes home to regroup, a disappointing but not surprising 5-5 season ending with a three game losing streak now behind them.  to listen to the game, where the first half was pretty exciting and fun, follow this link and enjoy the Forsyth Sports 365.com call from Greg Golden and Doug Thomas.

So the playoffs go on without South, but Region 5 is well represented.  Those rascally Wolverines of West Forsyth, who didn’t make any friends after their defeat of South at South in the regular season finale, got a round one win against Newton, as team described by our at large buddy Jonathan Terrell in his chat post as “not a good team”.  West’s weward?   A trip to defending State 7A champion North Gwinnett for a round two match.  We’ll see if the amazing elixir that West has found for it’s second half turnaround works across the river.  And pre-season favorite Milton, led by former Forsyth County coach Adam Clack, took out South Gwinnett.  They’ll get another playoff game at home against an always dangerous Mill Creek in the Eagles Nest on Birmingham Highway.  Now, that should be a great matchup.   You want some other choices?  Listen to these second round games across the state.  Archer at Parkview.  Ummm, tickets please?   Lowndes at Westlake.  Norcross at Grayson.  Walton at Hillgrove.   Mill Creek at Milton.  Ease Coweta at Tift County.  McEachern at Colquitt County  (Where’s my helicopter?).  West Forsyth at North Gwinnett.  And if things go as predicted, we’ll have in the third round Westlake at Grayson, Milton/Mill Creek (I think that’s a draw) at Hillgrove, Tift County at Parkview, and Colquitt County/North Gwinnett.  Not sure where that last one would be played as both are one seeds.  Probably have to invoke that GHSA formula on that one.

All that was laid out to allow you, the guest, to have a look at what will is necessary to step up and play with the big boys in Georgia’s Class AAAAAAA.   South Forsyth got a taste of it three years ago with their memorable run to the quarter finals.  If the split to Denmark hadn’t happened, guys like Capers and Cannaveres might still be helping the War Eagles advance.  But no use looking back.  Only ahead.  Meanwhile, enjoy the playoffs and the Battle to the Benz.  We’ll keep you posted right here on ForsythSports365.com

Thanks as always for checking in with Forsyth Sports 365.com!