Here come the playoffs, ready or not. Can you believe it’s been 11 weeks since the kickoff? Me neither. But as Georgia fans swallow hard and try to come to grips with leapfrogging Bama to earn their #1 ranking in the CFB Playoff Picture, rankings no longer count for anything in High School football. Survive and advance, loser goes home, winner take all football is here again.
Four teams from Region 5 have qualified for the Class 7A playoffs. We’ll get to them in a moment. First a word on those who didn‘t make it. In last place this year, the Forsyth Central Bulldogs. An 0-10 season is nothing to be proud of, normally. A few years from now, an individual looking back might not find anything from that mark to warrant a second look. When you graduate a player like Sabrien Howard (a Freshman at Cornell University), you can expect some growing pains. But it shall be noted here that this is the finest winless team this observer has ever seen. Losses mounted, but the competitive nature of the Bulldogs never waivered. From the opening kick to the final whistle, this team played hard. I’ve said this on the air but now I’m going to commit it to print. Forsyth Central Head Football Coach Frank Hepler might have had his finest season in his 25 years as a Head Coach. By game 5 or 6, any ordinary coach might have started losing his kids. Close games, frustrating losses by just two points, an injury here and there and many young men at this level would have quit, just using it as an excuse to get out of class. Not Hepler’s crew. No matter the score, early or late in a ball game or the season, Hepler’s kids played every down like it was the deciding play to win the title. Hats off to that group of players and coaches, and look out. Adversity builds character, some smart person once said. Count on it at FCHS forever.
Lambert was last year’s Region 5 Class 7A champ. The Longhorns of Coach Louis Daniel certainly didn’t expect to miss the playoffs this year. But when you lose a player of Richie Kenney’s caliber (a Freshman at Cornell University…yes, he and Howard are roommates), you can expect some adversity. The Longhorn’s offense never could get untracked after Kenney’s graduation, and it proved to be the difference in a 3-7 year. A group of Sophomores who helped the team make strides two years ago is graduating, and Daniel will have to hope that those who are rising will take over the leadership role. One bright spot for this year’s team: Marcus Chatelain, the fine defensive back, took over the tailback position full time after a few games and finished the season as the #1 rusher in Region 5 for 2017, overtaking South Forsyth Senior Jared Honey and Milton Senior Solomon Vanhorse. While the two finished just over a thousand yards with last game efforts, Chatelain finished with more than 1200 on the year. That offensive line effort is something to build on.

So here’s who’s in:
1   South Forsyth 9-1, 5-0 Undefeated on the field and in the Region, South gets to play a really good Mountain View team, 8-2, 4-2. How did this team, with the D-1 connection of quarterback Matt Edwards to Georgia Tech verbal Malachai Carter, end up 4th in their region. Well, it’s like this. Both losses were to Region 6 foes, eventual champ North Gwinette, and Collins Hill. The two region losses tied Mountain View with Collins Hill and Mill Creek for second place, and the tie breaker is points. Therefore, Mountain View finishes in fourth place in Region 6, Class 7A. It’s a tough opening, but South should be equipped to compete with their pressure defense and ball control offense. And it’s at South Forsyth.  This game will be our game of the week on forsythsports365.com.

South Forsyth Head Football Coach Jeff Arnette once again spends some time with us, taking a look back at the season and ahead at Mountain View.          Listen to the interview here. 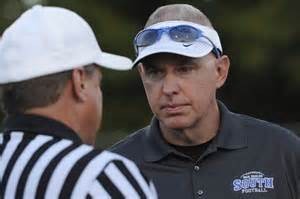 2   Milton 8-2, 4-1 Milton gets third place finisher Collins Hill 6-4, 4-2. Collins Hill has the most losses of the Region 6 crew, but the points total went in their favor. Plus, the Eagles beat their opponents head to head, including a 29-21 victory over Mountain View. This clash of Eagles features a thousand yard rusher in each backfield and a defense with at least 1 D-1 prospect at linebacker on both sidelines. Milton is the home team.
3   West Forsyth 7-3, 3-2   The Wolverines had a great run through the season, and would have been the #2 team in the region if TE Garrett Woodall would have been able to stretch another inch or two after the 4th down catch in the waning minutes against Milton. Sadly, Woodall’s brilliant effort on a beautifully executed counter throw back play came up just that…an inch short of the goalline, giving Milton the chance to run out the clock and preserve the win. Which they did. That one inch could turn out to be a bigger miss than anybody saw at the time. The 3rd place Wolverines get the Region 6 2nd place team, Mill Creek 8-2, 4-2. Always a threat in any sport, the Hawks represent one of the biggest schools in the state. In fact, Mill Creek was so big that 8 years ago Gwinnett County opened Mountain View. And Mill Creek’s attendance still tops 3500 students. Boasting a balanced offense with more than a thousand yards through the air and two thousand on the ground, the Hawks have their gaze on a spot a few brackets down. The Wolverines must travel to Hoschton.
4   North Forsyth 5-5, 2-3   It was crazy crazy in Raider Valley just a few weeks ago when, with both teams at 2-0 in the Region and a couple of big offensive performances under their belt, the Raiders were set to host South Forsyth. The result, however, was the first of three straight losses to close the regular season: to South and then West Forsyth at home, and then to Milton on the road. The good news is North’s earlier victories over Central and Lambert were enough o get them in. The bad news is they’ll travel across the river and play Region 6 Class 7A champ North Gwinnett 9-1, 6-0. The Bulldogs lost their opener to Walton 31-28 on a last second field goal, the ran off 9 in a row, including an undefeated run through their region. They won their games by an average score of 37-14. They threw for 1500 yards and ran for 2400 yards. They’re pretty good. But it’s the playoffs. Survive and advance
Don’t miss our LIVE broadcast of the South Forsyth vs Mountain View contest Friday night at 7:30, pregame at 6:30, from the Eagles’ Nest at South.  Our live call will also be patched in by M-Tech Pro Media with their live video stream on the You Tube Channel War Eagle Nation.   Should be a great test for South Forsyth right off the bat. Don’t Miss It!!