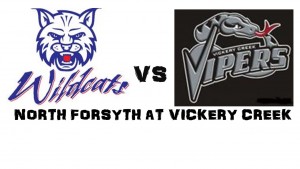 In a defensive struggle, the team that turns turnovers into points wins.  That’s the story in this battle of the unbeatens.  The North Forsyth Middle Wildcats scored on a 25 yard pick six by safety Heath Slayton, one of two picks by Slayton on the day, and a 44 yard fumble return by defensive end Carson Woodliffe for a 12-0 triumph over the Vickery Creek Middle Vipers, in the Viper Pit.  Both two point conversions failed, a mirror of the ineffective offenses from both teams.  After Slayton’s pick six, on the third play of the game, the Vipers held the ball for the rest of the first quarter, but penalties kept them from reaching the red zone.  North Forsyth ran their first offensive play of the game to open the second quarter.  The standing room only crowd at the football field carved into the woods behind the school included a good showing by the visitors, making for as good an atmosphere for a ball game as you’ll find anywhere. North Forsyth Middle improves to 5-0, Vickery Creek Middle falls to 5-1.

Listen to the replay in three parts here.  Part 1 has a twenty second delay, part 3 a minute delay.  We apologize for technical difficulties caused by an inconsistent mobile internet connection.