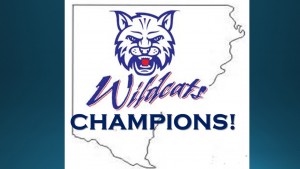 North Forsyth Middle rode their strength, a punishing ground attack, to a 28-0 victory over Riverwatch for their second straight Forsyth County Middle School Football Championship.  With the exception of an interception on a pass thrown by tailback Nicki Dalmolin on a halfback option, the Wildcats played mistake free football in dominating the Panthers on a rainy, windy evening.  Quarterback Noah Gilbert ran for two touchdowns on keepers.  Halfback Heath Slayton led the game in rushing and grabbed an interception.  The two teamed up for North’s final score, an 8 yard flare from Gilbert to Slayton for six, that earned the pair Forsyth Sports 365’s co MVPs.  In the team’s two playoff games, North Forsyth shut out both opponents and held both to less than a hundred yards of offense.  North Coach Ty Carnes is now 19-1 with back to back County Titles in the last two seasons. Listen to the REPLAY by following the link below.