Dawson County’s football team was down by three touchdowns TWICE Friday night in Dawsonville.  Yet here they were, less than a minute left, sitting on the South Forsyth five yard line with a third and goal.  The score was 56-49 South.  Everybody knew that if they scored, they would attempt a two point conversion to go for the win at Homecoming.  The place was going crazy, the stadium announcer whipping up a frenzy as the 0-2 Tigers were on the brink of a gut check comeback win.  From the pistol, Tigers Quarterback Zach Holtzclaw, who had been magnificent all game, took a three step drop and threw to his big tight end Max Moon.  The tandem had been unstoppable all night.

But then, out of nowhere, a figure in a silver helmet stepped in between the receiver and the ball.  Senior Mitch Thompson secured the pigskin and turned on the jets.   105 yards later Thompson and a couple team mates strode backwards into the opposite end zone, drawing a penalty flag for showboating but putting a W on an amazing football game,    63-49 in the War Eagles’ season opener.  You could hear the penalty flag hit the turf as the crowd went silent, watching helplessly as Thompson raced up the sideline to save the day for the War Eagles.  Dawson County drops to 0-3, the best 0-3 team you’ll ever see.

Everybody in South’s anticipated explosive offense contributed to the win, as the score might show.  Seniors Trey Green and Devin McGlockton scored multiple times and McGlockton stretched to his full height for a two point conversion.  Junior QB Kyle Durham showed the arm and legs that separate him from his peers.  And the offensive line was brutal down the stretch, pounding away at the Tiger defense to advance on the ground and run clock.

In spite of a missing dongle, the live podcast was pretty successful.  A halftime adjustment returned Doug’s commentary to life.  Many thanks to Dawson County Athletic Director Jason Gibson for the great set up for the podcast crew, including the power needed to bring the call. Thanks to Mike Newsome and DJMark for giving direction frim home. And many thanks to our valued listeners, who tuned in to the Blue/White game, the softball double header sweep vs Lambert, this game and a few recorded pieces, to make September 2020, unbelievably, the biggest month for listenership in our six year history.  And there’s one more game to go!   We could not be more grateful.

And now, the recording of South Forsyth’s season opener at Dawson County.  Do you think you have the strength to do this again?

Let’s find out.  Remember, to move back and forth across the Mixlr time line just point at the bar and click.  Have fun! 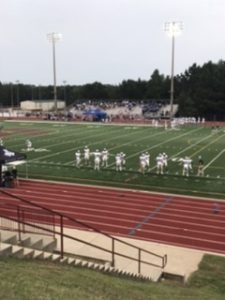 Our Podcast position pregame.        Who knew what was to come? 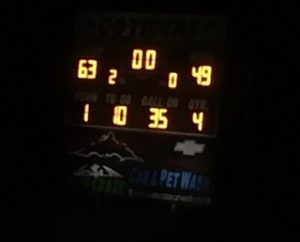 Many thanks to the South Forsyth Touchdown Club for making this        i-broadcast possible.  Copyright 2020 The Feet First Foundaton Inc.