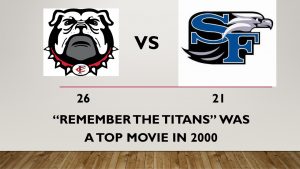 The year was 2000.  Most Americans were still monitoring their computers for Y2K effects.  George W. Bush had just taken over as President from Bill Clinton, and the “Hanging Chad” was a real thing.  LeBron James was a Freshman at St Vincent-St.Mary’s High in Akron, Ohio.  The average price of a new car was $25,000.  A gallon of gas was $1.26.  The Summer Olympics in Sydney, Australia, saw women first allowed to compete in the modern pentathlon and weightlifting.  The Sony PlayStation 2 was introduced and would be the most popular gaming system for the next decade.  Some young adults who graduated that year have kids enrolled there today.  And it was the last year that Forsyth Central beat South Forsyth in football.

Until Friday night.  The frustration of those 18 years was finally released at the Dawg House on Tribble Gap road, as the Bulldogs built a 23-0 lead over South Forsyth, then held on to defeat the War Eagles 26-21.  The win assures Central of a playoff berth in the GHSA tournament, something that has eluded Bulldog Nation for too long, especially in Dog Years.  The victory celebration was sweet, and lasted well into the evening on the field after the final buzzer, with the scoreboard, the final score still twinkling in glorious technicolor, lighting up the night.

The game began and ended with Central intercepting South Quarterback Drew Morris; the first by Senior Tristan Rose going for a pick six on South’s first offensive play of the game.  The second, by Junior Wide Receiver Jake Bretz, in to help on coverage, sealed the deal with a minute and a half left.  Trailing by six, South had driven the ball to the Central 15 yard line on the previous possession, but a bad snap, one of a zillion mistakes by the War Eagles on the night, snuffed that opportunity.  The War Eagles defense then forced a Bulldog punt, and on the first play of the final possession, Bretz outjumped South’s Pierce Meier and the party was on.

Another historic night in Forsyth County football, and we’ve got the replay to prove it.  Last week, South dug a hole against North Forsyth, but managed to come back for the thrilling one point win.  But it’s difficult to go that deep into the well and not get wet.  On this night, Forsyth Central left South Forsyth in the bucket, and the celebration around downtown Cumming is still underway, and likely will continue into the final Friday night of the regular season.   We’ll have a closer look at Central’s upset of South in the next edition of Musings.  For now, relive the fantastic effort by the Forsyth Central Bulldogs and Head Football Coach Frank Helper, and the determined comeback that fell just short by the South Forsyth War Eagles,  and Head Football Coach Jeff Arnette, RIGHT HERE:

As always, thanks for joining us on Forsyth Sports 365!