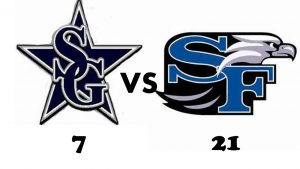 Well y’all have been very patient.  Thank you for hanging in there while we prepared and edited the replay of South Forsyth’s Big Win over South Gwinnett Friday night at the Eagle’s Nest on the South Forsyth campus.  We’ve got it all for you;  The thrilling first half that saw the War Eagles score the game’s final points just before the half; the tremendous Homecoming festivities that saw another football star voted Homecoming King, along with a talented fellow Senior voted Homecoming Queen; the thrilling DEFENSIVE effort by both squads in the second half; and the outstanding Halftime Performance by the South Forsyth Marching Band at the end of the game due to the Homecoming halftime.   Plus, Jon Benson the Third makes his return to the booth alongside Greg Golden for the first time this season:  Double G and JB3 on the mic for all the action.

Enjoy a great evening from Friday night’s Homecoming at South Forsyth High as only Forsyth Sports 365 can bring it to you, right here.