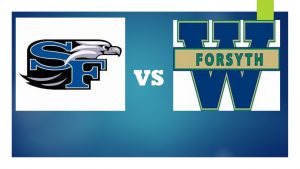 The playoffs are still a part of South Forsyth’s future, but a home playoff game isn’t without a little help.  Either way, South Forsyth’s Jeff Arnette confirms, only a win against a resurgent West Forsyth team would keep them in the hunt for the second home playoff game, awarded to the #2 team in each district.   A loss almost assures the team would travel across the river to take on defending Class 7A state champion North Gwinnett, this year’s back to back champion of Region 6 – 7A.   Listen in as Coach Arnette shares his thoughts in the final week of the 2018 regular season.  If you can believe that.  Here’s Coach Arnette with Forsyth Sports 365’s Greg Golden.

Be sure to tune in Friday night at 7pm for the regular season finale as West Forsyth invades South Forsyth.  It’s LIVE exclusively on Forsyth Sports 365.com