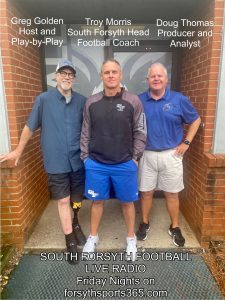 South Forsyth Head Football Coach Troy Morris knew he was looking at a big team in the visiting Lanier Longhorns for the home opener Friday night.  What he didnt expect was the ferocity of his defense in shutting them out.  The 28-0 score has brought some attention to his War Eagle squad by those who rank teams in the state’s Classes.  South has found itself in some observers top 20 in the GHSA’s Class AAAAAAA.  In fact, Max Preps has South Forsyth at #15.   It’s very nice to be recognized but far too early to care.

South faces the first regular season road opponent Friday in the Harrison Hoyas, who are in the same region as some of the state’s top teams including Marrietta and McEachern.  The school is set back off a road near Kennesaw Mountain where it’s one way in and one way out.  Hoya Athletic Director Wes Ellis suggests if youre coming over from Forsyth County you come a little early. Everybody knows what traffic is like in Cobb County anyway so be prepared.  Ellis said the team lost it’s opener last Friday to South Paulding in heartbraking fashion in the game’s final minutes.  This game is Harrison’s Homecoming.  It seems a little early in the season but Ellis said they were limited in choices.  So count on an active, noisy crowd and a bawdy atmosphere.   Ellis, who took over the Harrison AD post in February, spent fifteen years as the baseball coach at nearby Hillgrove so he knows what big time Georgia High School athletics is all about.  He says he loves the coaches he’s inherited and is eager to revive the good fortunes of his football team.  In 2019, Harrison was 15-0 and won the AAAAAA state title.

So Here’s your Coaches Corner for this week.  Coach Morris joins Greg Golden and Doug Thomas for the look back at the shut out of Lanier and ahead to Friday’s tilt with Harrison.