It was super exciting to finally see #1 for South Forsyth back on the field  Chris Nelson, ine of Georgia’s fastest high schoolers, made his first appearance for the War Eagles this season, and did a little bit of everything for his team in a Region opening game at War Eagle Stadium   Sadly, it wasn’t enough as Milton intercepted a potentially game tying toss from South QB TY Watkins to Nelson in the game’s final minute to hold on for a 35-28 win

After the game, everybody was exhausted   Everybody, from both teams to their coaches to their bands to the cheerleaders to the fans to all of us in the booth, left it all on the field.
Including yours truly   That’s why it took a little lnger to get this post up.  It was a pleasure to be a part of it   Even Santa Claus made an appearance, having heard the pre game hype all the way to the North Pole   We have the interview at halftime
So go ahead, cluck on the link and relive the thriller   Even though it didn’t make it into the W column, it was a splendid performance, gritty and gutsy and everything you want in a great football contest.   Santa would agree 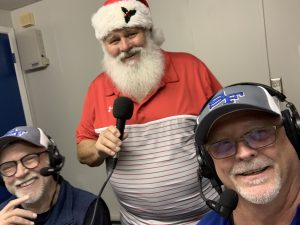