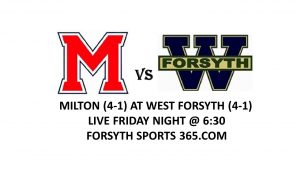 Welcome back to football in Forsyth County, Georgia! Fall break is behind us, and so is the non-region portion of the schedule. Hello Class 7A, Region 5, one of the most balanced Regions in all of the Peach State. When last we heard the dust settle on the gridirons of FoCo, we saw South Forsyth tighten its grip on the Region lead and its Top Five ranking in the Georgia Sportswriters Association poll with an impressive victory over then Tenth ranked Lassiter 33-20. South’s ranking is the highest ever for the school and quite possibly the highest ever for a Forsyth County school. And so the War Eagles, at 5-0, seem to be the team to beat.
But not so fast my friend, say the other Region 5 Eagles and the Wolverines. While South was drawing the attention of those who pay attention to things like top five rankings, Milton and West Forsyth were positioning themselves to enter region play as the clear challengers to the mighty War Eagles. Milton has impressive victories over North Gwinnett, going up 21 on the vaunted Gwinnett County powerhouse before holding on for a three point win. Then, two weeks ago, the Eagles thrashed Roswell by thirty points. Oh sure, you say, this was not the same Roswell team South beat in the opener. There have been internal troubles, some disqualified athletes and, after a couple more losses, the team seems to have lost some incentive. But make no mistake, the 4-1 Eagles of Milton are for real.
West Forsyth, on the other hand, has been the Comeback Kids. Early wins over Woodstock and Pace Academy showed promise. But then a loss to Hillgrove took some air out of the balloon. At 0-2, Hillgrove looked vulnerable, and West thought this was the year to avenge some previous losses, including a playoff defeat last year. The Wolverines found themselves at 2-1, and painfully as well. The squad faced a Dacula team at home the next game, and found themselves down 9 at halftime in what West Forsyth Athletic Director Brett Phipps described as “the worst half of football in recent West memory.” But something happened in the locker room at the half. Phipps calls it the turning point of the season. West found some aggressiveness on defense, and thanks to that and some outstanding play calling and execution, came back to win that game. Then two weeks ago at Newnan, at their homecoming, West was again down early. But they weathered the early storm, and stormed back themselves for a satisfying victory going into fall break 4-1.
So looking at this week’s Region 5 opening match ups, we see the following:

Lambert (3-2) at South Forsyth (5-0)
Last season the Longhorns struggled a bit early, but found their stride behind Senior signal caller Richie Kinney (now at Cornell) to earn some timely wins down the stretch and claim the Region 5 Championship, the first football title in the Longhorn’s history. But South Forsyth was going through some injuries, including the loss of Senior QB Davis Shanley (now at Western Kentucky) and his back up, current starter Cal Morris. That’s not the case this year. South is healthy on both sides of the ball and ranked 5th in Class 7A. Lambert has had trouble finding offense this season. That’s not something you want to take into a game with the War Eagles. The chances of an upset in The Eagles’ Nest Friday night are slim to none. Expect another strong game from South Homecoming King Jared Honey and a bruising South pressure defense in a big victory for the War Eagles in this backyard rivalry.
FS365 Sports Freaks Fearless Prediction: South Forsyth 35 Lambert 17

North Forsyth (3-2) at Forsyth Central (0-5)
This rivalry between the original Forsyth County High School (FCHS forever) and the upstart North end kids has been exciting for more than twenty years. Forsyth Central has been looking for offense all year long. But as they found some, their defense began to slip. Look at the Bulldogs scores in their five losses: 0-9, 0-7, 27-29, 41-42 (OT), and 42-49 (OT). Two weeks ago in their second straight OT loss, Senior QB Brad Thiltgen put together a game for the ages with over 500 total yards from scrimmage in the loss to Kennesaw Mountain. Central is sooooooo close to a win. North Forsyth, meanwhile, had strung together three straight wins after a heartbreaking opening night last minute loss to Sequoyah. The offense was humming behing QB Ben Bales, who has thrown for nearly 1500 yards, 15 TDs and just 4 interceptions on the year. Then into Raider Valley comes a 2-2 Woodstock team that just got shut out by North Paulding and hands North a 44-17 defeat. The Raiders will need this win to keep pace with the rest of the Region and stay in the playoff hunt. Central just wants to get one after coming so close so often.

FS365 Sports Freaks Fearless Prediction:North Forsyth 38 Forsyth Central 31
Milton (4-1) at West Forsyth (4-1)
Now for our Game Of The Week. It’s enough, as you saw in the opening write up, that these two teams are well positioned to play for the right to challenge South Forsyth for Region 5 supremacy. Both winners of two straight, in dramatic fashion in one way or another, both finding offensive rhythm and defensive staunch. Then you throw in this little sub-plot. Football Coach Adam Clack, who last season was the Head Coach at West, left his position over the summer and took most of his offensive staff with him…to Milton. Say WHAT???
This is of course if you haven’t heard yet. Most folks in the West Forsyth family have had this Friday night circled on their calendar ever since. Here comes Coach Clack, with his point a minute offense, back to the Den looking to push the Wolverines and new Head Football Coach Shawn Cahill back into a fight for third place in the region. It’s not as good of a story as two 4-1 teams on a roll, but West AD Brett Phipps, who says Milton fans travel well, thinks this will be one of the biggest gates in West history. So yeah, we kinda wanna be there. And we will.
FS365 SPORTS FREAKS FEARLESS PREDICTION:
OH, NO NO NO. YOU’LL JUST HAVE TO TUNE IN.
Friday night, 6:45, LIVE from the Den.
Exclusively on Forsyth Sports 365.com.