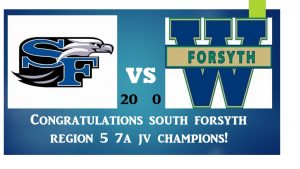 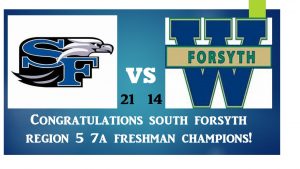 The future looks bright for South Forsyth football as both the Junior Varsity and Freshman football squads beat their opponents from West Forsyth to take home the 2018 JV and Freshman Region 5 Class 7A football titles Thursday night at South Forsyth.

In the opener under beautiful sunny autumn skies, Coach Jake Martin’s JV team rode its stingy defense to a 20-0 win.  South took the lead in the first few seconds of the game on a 56 yard Joe Slott to Mitchell Thompson touchdown strike and never looked back.   Listen to the replay HERE:

In the nightcap under the lights, the South Forsyth Freshman under Coach Avery White outlasted a talented West Forsyth Freshman squad in a thriller, 21-14.   In a game full of penalties and turnovers, the two squads entered the fourth quarter tied at 14 all.  A 37 yard td run, a late interception at the ten yard line and a sack on the final play sealed the deal for the War Eagles.  Listen to the replay HERE:

Don’t forget to tune in Friday night at 7 as Milton visits South Forsyth for the driver’s seat in Varsity Football Region 5 Class 7A, LIVE right here on Forsyth Sports 365!! 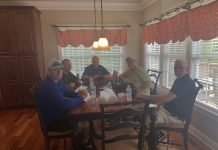 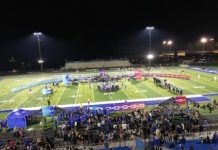