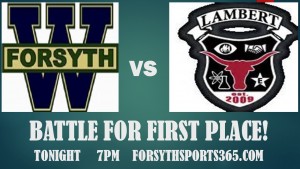 In a game driven by a county rivalry and fueled by points off turnovers, Lambert High came back from an early 16-7 defecit and turned to a secret weapon and the old fashioned ground and pound to claim a hard earned victory over resurgent West Forsyth, 35-31 on Senior night at The Horn on Nichols Rd.  The lead changed hands six times in the roller coaster tilt.  West scored half their points off a variety of turnovers, including a blocked punt by Grant Torgerson, returned 35 yards for 6 by Thomas Arundale,  and a 54 weaving through the crowd pic six by Luke Lingo.  But Lambert kept pace by gaining 200 yards and three of its five touchdowns on the ground, including a gutsy one yard keeper by quarterback Richie Kenney as time expired in the first half. They also scored on a 50 yard pick six by safety Jarrett Wright.  The roller coaster finally came to an end on a fourth quarter drive led by Lambert’s second (don’t call him the back up) quarterback, Bobby Gabriel, and normally defensive back Marcus Chatelain.  Chatelain accounted for 54 yards, including crowd pleasing runs of 22 and 14 yards.  Gabriel put The Longhorns up for good on a 4 yard naked bootleg featuring a great black by wide receiver Tyler Gillis.  That put Lambert up by three, 34-31.  The all important extra point try, which would put the Horns up four, took seven minutes and three tries, the last two by backup kicker Nikolas Propes, after Tanner Hall was hurt on a roughing the kicker penalty.  The next attempt, after a five minute discussion between the officials and both coaches, was good but negated by an illegal procedure call.  Finally, after two consecutive defensive offside penalties on West, Propes’ kick was true and the Wolverines would have to score a touchdown.  The ensuing kickoff went into the endzone, so the Wolverines got the ball on their 20 with 2:24 left.  Plenty of time for their high powered offense.  But the drama ended when West quarterback Kiernan Hamilton fumbled the ball on a scramble up the middle with fifteen seconds left.  Lambert jumped on the ball, and with the sell-out home side going crazy, took a knee to end the thriller.  Lambert’s defense held the West offense, averaging 420 yards a game, to 275.  West Forsyth falls to 5-3, 5-2 in the Region.  The win, Lambert’s 7th straight, puts the ‘Horns alone atop Region 6 AAAAAA at 7-1, 7-0 in the Region.  They travel to winless Chattahoochee next Friday, then finish the regular season in two weeks at South Forsyth.  Listen to this fantastic ball game via the link below.

Lambert beats West in a thriller! 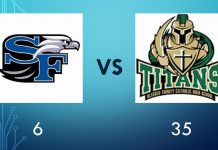