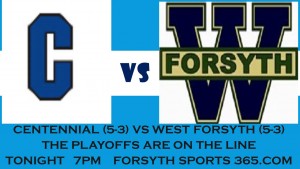 On a chilly night in the Den, West Forsyth turned to a scheme more popular with some of their rivals to put away the Centennial Knights; the ground and pound.  Tailback Grant Torguson rushed for 132 yards on 33 tough “between the tackles” carries, and scored three times to lead the Wolverines to a hard fought 31-21 win over Region 6 foe Centennial.  The Wolverines gained the inside track to a playoff birth in Class AAAAAA.  Joey Congrove returned a kickoff 65 yards for a touchdown, Eli Huggins recorded a pair of sacks and three tackles for loss, and linebacker Jackson Brantley sealed the deal with an interception of Knights quarterback Cason Conway’s laser that allowed West to take a knee.  West Forsyth improves to 6-3, 6-2 in the region, and sits in sole possession of third place with one game to go.  The top four make the playoffs.  Listen to Greg and Rich on the call in the REPLAY of the exciting, hard fought game by following the link below.