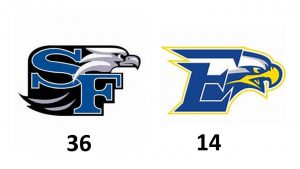 The mark of a solid coaching staff and team is the ability to shake off a loss and move on to the next game.  South Forsyth did just that, putting the dismantling by Blessed Trinity behind them and playing their most complete game yet in a 36-14 victory over Etowah Friday night at South.  War Eagle quarterback Drew Morris looked like the QB everybody though he’d be, rushing for more than a hundred yards and throwing for a hundred more with three touchdowns.  With Running back Jordan Brunson seeing limited action, Coach Jeff Arnette turned to his Senior captain and Morris came through big time. With the Offensive Line giving Morris time,  all three touchdowns, to three different receivers, were for 20 yards or better, with the tosses sharp and on the money.  The defense was splendid, with contributions from everybody.  The unit allowed only 38 total yards in the first half.  the only slip was on the opening play of the second half, a 73 yard touchdown run from a student body left formation by Sophomore Running Back Klivert Many.  The other Etowah score came on the kickoff following South’s first touchdown, a 95 yard return.  The rest of the night, Etowah was forced into second and third and long situations and couldn’t resolve it.  The margin could have been much larger as South left at least 19 points on the field, with two dropped touchdown passes, two blocked extra points and a blocked field goal.  But that can be worked on.  The final represents a solid win for South Forsyth, who improved to 2-1.  Etowah falls to 1-2.  Up next for the War Eagles is a home contest against South Gwinnett next Friday.

To enjoy the game again, and enjoy outstanding anthem and halftime performances by both school’s marching bands, catch the replay HERE: