oIn the game’s first offensive play, Ty Watkins went deep to Chris Nelson for a 50 yard touchdown and a 7-0 South Forsyth lead over Denmark at Denmark.

Then the defense took over.

South allowed just a second half field goal, which they matched in the fourth quarter, to come away with a hard earned 10-3 road win over the Danes.

Josh Nelson was brilliant in pass coverage in his first action of the season, breaking up at least 4 passes, two in the end zone.  And Hayden Mock  had his name called a dozen times on defense, proving to be a disruptive force in a most disruptive defense.  The D also recorded five sacks, including a huge one as the Danes tried to score in the final minute. 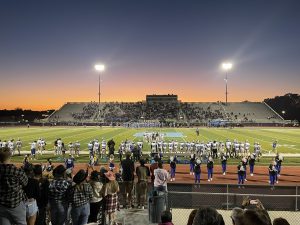 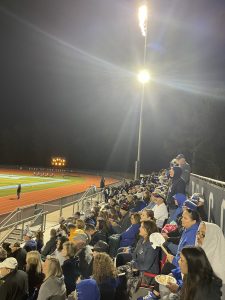 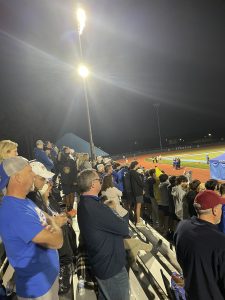 A beautiful night at Denmark High, and photo evidence of the outstanding crowd on the visitor’s side.  SOFO Nation matched the decibel level Ohm for Ohm.