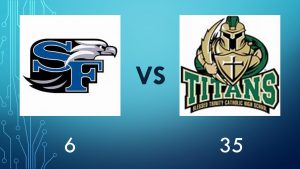 Blessed Trinity proved they are worthy of the national acclaim they’ve received this summer, showcasing a potent offense and a relentless defense in dominating the War Eagles 35-6 Friday night in Roswell.  The Titan offense took advantage of good field position throughout the first half to claim a 28-0 lead at intermission , then coasted through the second half to improve to 2-0 on the young season.  South falls to 1-1, but suffered more injuries that could be season changers.  The War Eagles had Junior linebacker Brett Morlanne helped off the field in the first half with a leg injury. Then key offensive weapon Junior RB Jordan Brunson was spotted walking gingerly to the field out of the locker room for the second half and did not enter the game thereafter. The condition of these athletes was not known at press time. It was announced late Thursday that Senior linebacker and Captain Jack Pehrson is out for the season with an ACL tear, suffered during the opener at Sprayberry.  We’ll do our best to have a full injury report sometime before the War Eagles host Etowah next Friday for their home opener.

Here is the replay of the game.  The across the lineup speed and physicality of this Blessed Trinity squad was on full display and is captured here in this recording of the live podcast.