If you watched the South Forsyth opener at Dawson County, or listened to it here on Forsyth Sports 365, you might’ve noticed the defense gave up 49 points.  You might’ve also noticed that the defense scored 16 points themselves to add to the offense’s 47 for the winning 63 point total.

Since that time, notes South’s Defensive Coordinator Ross Walker, the War Eagle defense has been a little stingier each week.  They allowed 27 to Central Gwinnett, then 14 to Lambert in the Region opener, and last week just 7 to an aggressive Alcovy team that put up 58 points in its last two.

This defense is improving each week, and here to talk about that is the man who is overseeing the project to improve, Defensive Coordinator Ross Walker.

These young men are gonna EAT!

Learn more about that and a lot of other stuff as Coach Walker joins Greg Golden in this week’s Coaches Corner.   He’s naming names so listen in and enjoy some insight from the other side of the football as we get defensive minded. 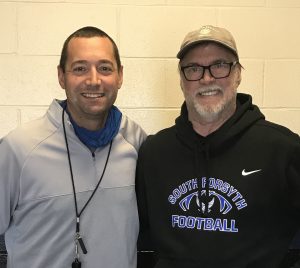