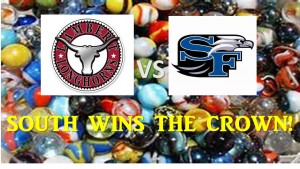 Sam Outlaw rushed for 105 yards and two touchdowns, including a 75 yard dash, and Davis Shanley threw for 235 yards and two scores, including a 75 yard bomb to Ronnie Chambliss, as South Forsyth fulfilled a pre season goal and won the Region 6 AAAAAA Championship with a 31-6 pasting of rival Lambert.  The War Eagles (9-1, 8-1) dominated on both sides of the ball, compiling 407 yards on offense while holding the Longhorns (9-1, 8-1) to just 184, where two long runs by Will Kholins late in the 4th quarter as South was beginning to celebrate accounted for nearly half that total.  Kholins finished with 118 yards on 13 carries and a touchdown.  South earnes a #1 seed in the playoffs, and their first home playoff game since 2001.  But it’s a tough start.  They’ll face a #4 seed Norcross (7-3, 5-3) team just two seasons removed from back to back state championships.  With it’s first loss in region play, Lambert drops to the #2 seed, and will host #3 seed Collins Hill (5-5, 5-3), who beat Norcross in their season finale.  It’s Lambert’s 3rd straight home playoff game and fifth postseason appearance since the school opened its doors in 2009.

Listen to the replay here:  South tops Lambert for #1

Region 6 AAAAAA teams in the playoffs, 3 of 4 are Forsyth County: