The South Forsyth War Eagles are proud to be led by not four, but FIVE Captains in 2020. We thought their Bye Weekend would be a great time to chat with these young men and let everybody in on their thoughts on the second half of the season.  Let them tell us where they’ve been, where they are today and where they’re going to be in the next several times.  The SOFO FAB FIVE were elected by their teammates before the Blue/White Game.  Pictured above, from left, SR DE Taft Hilton, SR Mr. Everywhere Devin McGlockton, JR QB Kyle Durham, SR OL Bradley Hutcheson, and SR LB Alec Stephens.

We put them through a grueling circle drill, where we had them spend a few minutes talking about each other.  Then we sat them down one on two with Greg Golden and Doug Thomas.  Yes, facing back surgery next week, Doug manned up and helped Greg deliver this excellent bit of old fashioned radio with these young gridiron heroes.  One thing is for certain.  Once you start listening you won’t be able to turn away.  Until you have to click on the next one.   Just in time for your bye weekend, here come                                                    THE CAPTAINS! 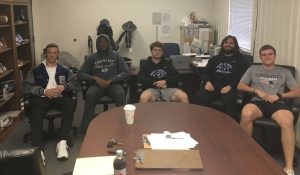 The coaches gave up their offices so we could go inside the program at South with these five elite individuals.  With a swivel mic, we achieved proper distancing, unidirectional commentary and hands free delivery for our student athletes   Here are a couple of thoughts from the moderators ahead of this podcast.

Doug Thomas:   I’m struck by how much fun this was to spend time with these captains on this team. The one thing that jumped out to me, besides the fact that they are all such nice and respectful young men, was how each of them when asked questions about them quickly turned it around to praising other members of the team, that are such a big and important part of their success. Not only do we have great leaders, but very humble players as well.

Greg Golden:   The best thing about this, for me, was introducing these guys to a radio or audio interview.  Sometime down the road they’ll need to be familiar with this skill.  And they’ll all tell you the three things they learned. First, you can run out of air fast.  Who talks like that in real life?  Second,  you have to be in the moment.  You take a second off and the interviewers are going…uhhhh, hey champ,  You OK?                                       And Third,  time flies!   You’re being shown the door and you cant hardly remember what you said.  And then when you hear it back…DO I REALLY SOUND LIKE THAT???

Here’s the Group Interview with the South Forsyth Football Captains 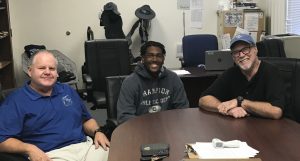 DougThomas:   From the conversation with Devin, what I loved is that he lets his performance on the field do his talking which is so great to see. Extremely talented young man that is going to get many D1 offers in football and I’m sure basketball as well.

Greg Golden:  Devin’s a fun guy.  Maybe not so noisy, but when I was briefing the guys, I told them somebody has to go first.  Devin jumped up and said I’ll go first!  He’s super talented and loves to jump right into the middle of life.  He’s the perfect lead-off

Here’s the interview with Devin 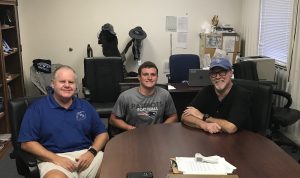 Doug Thomas:   Talking with Alec, you can see he has an agenda which is focused on grades, and to follow in the family footsteps of his brother Andrew by going to the University of Georgia. Last take away is that he is going to enjoy every minute of his Senior year on this team and just wants to hit.

Greg Golden:  I was down at the Fieldhouse doing a last visit with Coach Walker to try to finish the agenda.  There he introduced me to Alec, saying he was the guy who would have them all in the same place at the same time.  He absolutely was, and joined us in this great conversation here.
Here’s the interview with Alec

Doug Thomas:   My first reaction to our conversation with Taft was “Wow, what an amazing young man”. Obvious love for his teammates and focused student of the game so to always be prepared. The conversation around the importance of his Church in his life, and the 2 year mission trip he is departing for in January (as he is able to graduate early), should be an inspiration to us all.

Doug Thomas:   Spending time with Kyle I noticed how determined this young man is. The way he approached rehabbing and coming back from his broken hand in his Sophomore season easily shows you why as a Junior he’s a Captain on this team. He leads by example. That’s what a Captain does, and he’s doing it very well. By the way, did I mention he’s a Junior?        Sky’s the Limit.

Greg Golden:  In conversation, Kyle doesn’t waste a lot of words, which is pretty amazing considering on the field he’s quite the lyricist.  Kyle described how he used to walk into the Fieldhouse and see those former Captain’s portraits  on the wall and dream it was him.  Today he’s got a good chance to be up there twice.

Here’s the interview with Kyle

Doug Thomas:    This was a fun one for me as I have such a passion for the guys on that offensive line. I love that his teammates all call him Hutch, but when he get’s home it’s back to Bradley. He’s an obvious steward of the game the way he talked about the importance of all the techniques, and you can tell how proud he is to following in his two older brothers footsteps, Briggs and Bryce, who also were on the O-Line at South.

Greg Golden:   The Thing I really enjoyed when chatting with Hutch is his football vocabulary.  Throughout our conversation Hutch would drop in colorful football colloquialisms that could only come from a football background, in this case his football family.  It’s easy to see why his teammates voted him in.  He’s all about his teammates and the game.

Here’s the interview with Bradley.

We hope you enjoyed this meeting with the Captains of the 2020 South Forsyth Football Team.  It was truly an honor to spend some time with the men who were voted in by their teammates.   We’ll get to another Coaches Corner when we catch up with Head Coach Jeff Arnette one day next week.  Then the next biggest test comes next Friday when the War Eagles visit The Den to mix it up with the West Forsyth Wolverines.  We hope to see you there!  And tune in to our live podcast kicking off at 7p from the balcony at the Den.