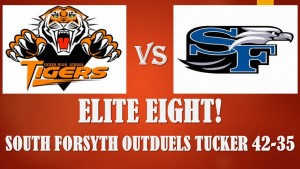 QB Davis Shanley ran for nearly 200 yards and two touchdowns and threw for another, and South Forsyth’s defense stopped Tucker on fourth and goal at their own seven yard line as South Forsyth defeated another Georgia High School legend in Tucker, 42-35.  The victory marks the second time in South Forsyth’s history the school’s football squad has made the Elite 8.  It’s a rare and noteworthy occurrance in Forsyth County.  Between Tucker and last week’s victim Norcross there are 4 state championships since 2008, making South’ run that much more impressive. A coin flip has determined that South will face undefeated Colquitt County in round 3 at home on Black Friday, so the team, staff and Boosters will have to put aside shopping plans until Saturday..