South Forsyth Head Football Coach Troy Morris acknowleged he is excited about his War Eagles chances to earn some notoriety this weekend when his War Eagles load up the charter busses again for another long road trip.  The destination this time will be Bogart, Georgia, home of the North Oconee Titans.  The area around Athens is full of great football players, and North Oconee will come into this game as the Number One (#1) ranked team in Georgia’s Class AAAA, according to Georgia Public Broadcasting’s (GPB’s) most recent rankings.  I spoke with North Oconee Athletic Director Michael Dowis and congratulated him on the honor.  Then I laughed when he told me that was news to him.
Listen in to Greg Golden and Doug Thomas’ conversation with Coach Morris and hear his reaction to that announcement, and a bunch more candid takes as we look back at a bg road win at Harrison last week and ahead to the task at hand this week in Bogart.  It’s a lot of fun and an exclusive of forsythsports365.com.

yes this is a look at my new prosthetic leg. The photo was taken at Hanger Clinic on Buford Hwy near Ingall’s just before I put it through a pre delivery workout.   It’s got a vacuum function that reduces motion in the cup.  State of the art technology.   Plus, a new design on the front.  That’s the familiar Michigan M and “Wolverines” arcing above it.  Be on the lookout for it Friday in the visitor’s bleachers at North Oconee.  There will be photo ops at halftime. 😁 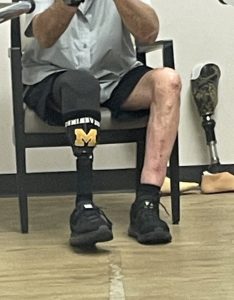