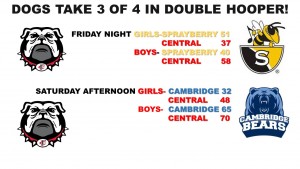 In a crazy finishing stretch that has the Forsyth Central girls and boys basketball teams playing four games in seven days, the Bulldogs took three of four on the doublehooper weekend.  On Friday night, the Lady Bulldogs succumbed to the swarming pressure of the Lady Yellow Jackets defense and a double-double from all-state candidate Dyeisha Brown for a 51-37 loss. Julie Richards led Central with 16.  But that would be the last loss of the weekend for the Dogs.  Before a roaring Homecoming crowd led by the Central Crazies, the boys routed Region 7b second place Sprayberry boys 58-40 in a well rounded team effort.  It was a quick turnaround as Cambridge came to the Dog Pound Saturday for an afternoon tilt.   The Lady Dogs rode another complete game by Julie Richards (14 and 10) and the steadying hand of point guard Caroline Hearn to a 48-32 win.  Freshman center Audrey Smith scored 9 points and grabbed 10 rebounds, 5 on the offensive end, as a bright spot for the Lady Bears.  In the boys game, the Central cagers built a ten point lead early in the fourth quarter on the Bears, then survived a superb effort by Bears freshman point guard Kamar Robertson to hold on for a 70-65 victory.  Robertson scored 14 of his game high 22 points in the fourth quarter.  Parker Beirderer scored 16 for the Dawgs, Monty Kurtz hit five of six free throws down the stretch, and Big Dawg Jon Richards shok of a twisted ankle to contribute six blocks.  Ryan Kulaga nailed four of five treys in the 2nd half to help keep Cambridge close.  The victory is the fifth in a row for the boys.  Both teams finish the regular season when Region 7b, AAAAA rival Kell invades the Dog Pound Tuesday night.   Listen to the exciting replays here.  Click along the timeline to navigate.  Girls’ games are first, followed by the boys.  See the link at the bottom for the Forsyth Central Athletics home page.  Enjoy some great basketball virtual radio style!  BTW, the AAAAA Region 7 tournament will be hosted by Forsyth Central at the Dog Pound starting next weekend.