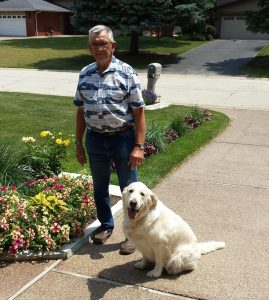 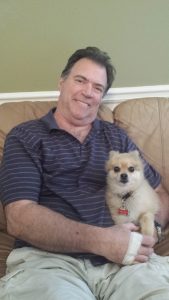 You never know who you’re going to run into when you’re walking your dog.

It was an unfortunate set of circumstances, the passing of loved ones, that had us in Chicago recently.  More specifically, we were in Palos Heights, a small community southwest of the city where you’ll find some of the best family owned restaurants in Chicagoland.  We brought Mocha, our 4 year old Pomeranian, and on our first morning there we set out for a walk.  Just around the corner is a High School and its football facility.  There’s lots of grass in and around the facility, and Mocha made it clear that THAT was where he wanted to be.  So, doggy bag in hand, I followed his lead.  As we approached the gate, there was a gentleman there with a beautiful English Crème-Golden Retriever.  He introduced himself as Dean, and his pal as Dutch.  Dean told me he liked to come to the field and let Dutch run, and as Dutch and Mocha, despite their size difference, seemed to hit it off, I decided to unleash him and let him go.  I thought it would be good for him after the twelve hour car ride the day before.  As the dogs took off for the end zone (my dog ALWAYS runs north and south), Dean and I stood next to the bleachers and began to chat.  I learned his full name was Dean Koldenhoven, that he’d lived in Palos Heights a long time, and that he was a brick mason by trade.  He was turning 81 the next day, and had only retired a year ago, turning his business over to his sons.  He listened as I talked about my radio background, and my sports blog I’d developed back home in Georgia.  Smiling, Dean told me that he’d done a radio interview or two, back when he was the Mayor of Palos Heights.  Wait, what?  The Mayor?  And at my urging, he began to tell me this incredible story, about his controversial turn, and a decision he made in 2000 that turned the town into a hotbed and earned national headlines.  While the subject remains a powder keg to this day, Dean says he’d make the same call again, because he used as his guide that venerable, time honored document, the United States Constitution.  I’m not sure how long we talked, but as he described the events in the Chicago suburb of Palos Heights, and those that followed in the wake, I knew I had to sit down with Mayor Dean and have him bring the story to life again.  History buffs and Constitutionalists might remember this saga as the mayor unfolds it, but every American needs to hear it, especially as events have played out in the sixteen years since.  As we leashed the dogs he agreed to meet me the next day in a college coffee shop/bookstore nearby and sit down for a chat.  As I often do, I thanked my lucky stars that I brought my mobile recording set up, because you never know who you’re going to run into when you’re walking your dog.

Here’s my interview with former Palos Heights, Illinois Mayor Dean Koldenhoven as he shares his amazing “Only In America” story.  It’s in two parts to satisfy the limits of the host, each about twelve minutes and worth every second.  Again, many thanks, Dean, for showing us the same fortitude our forefathers showed in standing up for the rights of every person under our stars and stripes and Constitution.  All the best to you and your family, including Dutch, and God Bless.